From trucking to tinkering: One man’s journey of recovery

When Dario Fogliatti started to feel a constant burning sensation in his left elbow, he worried what it would mean for his job. As a delivery driver for 12 years, Dario was an expert at securing large machinery onto the trucks. What he didn’t realize was the repetitive motion of chaining down each item would, over time, cause his elbow tendons to rip apart. 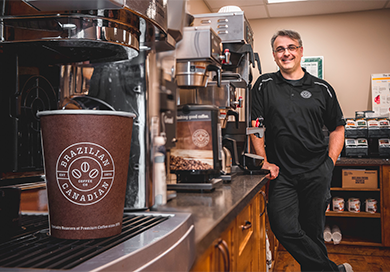 Pushing through the pain only prolongs the pain

“My employer put me on modified work, which helped for a while, but as soon as I went back to my regular job—doing heavy work for 12 hours a day—my elbow went right back to burning,” says Dario.

Struggling to keep up, Dario was eventually laid off, a moment he describes as hitting rock bottom.

A renewed hope gives Dario the drive he needs to thrive

Dario felt stuck, and needed to do something. Anything. So he reached out to WCB to ask if there was anything we could do to help him with his injury. Dario found himself on the phone with a case manager Tammy, and the response he received was more than he had hoped for.

For 12 years Dario had a steady income. In an instant that security was gone and with it, the means to support his family.

Tammy told him that because his injury was under WCB’s care, he’d be paid every two weeks to supplement his lost income.

“I remember that moment,” Dario says, “That’s the moment that I started feeling good again.”

Tammy connected Dario with a number of health care professionals at our Millard Health treatment centre as well as a surgeon in Calgary. Once it was determined that Dario’s elbow would not be fixed through surgery, his case manager began to seek out other career opportunities that would best fit his interest and support his physical needs.

“I like tinkering. This is perfect for me. I’m happy. I couldn’t have done this without WCB.”

The Training-on-the-job (TOJ) program was the ticket to getting Dario back to his life. The program would align him with a new employer and help pay his salary during training. Not to mention, it would provide any necessary ergonomic assessments and equipment, vehicle modifications and outside training he needed along the way. Let’s just say, Dario was interested.

“Since day one, what I really wanted was to get back to work.”

Dario asked if he could recommend his wife’s employer, Brazilian Canadian Coffee Company, which had an opening for a service tech. The employer was on board with the program and Dario began his new role. He would be fixing high-end coffee machines—something that was already a fun hobby for him. It’s an ideal situation for him and his elbow, especially after Tammy purchased lift equipment so he wouldn’t need to lift any heavy machinery.

“I like tinkering. This is perfect for me. I’m happy. I couldn’t have done this without WCB.”

Dario looks forward to participating in the apprenticeship program through his new employer and learning new skills that could further his career.

“I appreciate what everybody has done for me, from my case manager and everyone at Millard Health treatment centre. Thank you.”