Seeing past the blindness

When he got hurt at work, Barry Weatherall was married and living in Red Deer, working as a plumbing and heating engineer. One day, while cleaning a pipe filled with sulphuric acid, it exploded in his face, leaving him severely burned. He spent several weeks at the burn unit at the University of Alberta hospital in Edmonton, then several years undergoing surgeries to repair the damage to his eyes, face and neck—21 in all. 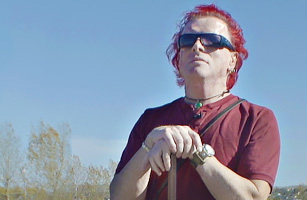 His marriage collapsed around him, as did his life. Or so he thought. He was afraid, angry, uncertain about his place in the world, and how to proceed.

"When I had vision, that unique beauty wouldn’t even enter my head because it was all about the visual. Now I no longer have the physical sense."

Reached out to CNIB for help

He initially rejected overtures by his WCB case manager to put supports in place for him from CNIB. Eventually, he relented, and six months later reached out to them for help. He learned how to use a white cane, and eventually took training at a guide dog school to be able to get a guide dog.

Today, Owen is his constant companion, his sidekick.

After 19 years without sight, Barry says he can see people for who they really are, not just who they appear to be.

"The one thing I’ve learned from the blindness is that we all have our unique beauty," he says.

"When I had vision, that unique beauty wouldn’t even enter my head because it was all about the visual. Now I no longer have the physical sense"

Since he began crafting a new life for himself, Barry has conquered a lifelong fear of heights and enclosed spaces, doing things like rock climbing, ice climbing and spelunking. He has been whitewater rafting, he has competed in triathlons. He has travelled extensively, both nationally and abroad.

"I’m a totally different person now than (before the accident), when I was married with vision," says Barry, now 56. "It completely changed me."

To a degree, my blindness has been a double-edged sword. There are things I truly miss—the stars at night, people-watching—but then I’ve gained and learned a lot in other aspects of my life, too.

"With vision, we sub-consciously make judgments without even realizing we’re doing it. I’ve learned that we need to look at people, and listen to them, with an open mind."