Forbes Bros. Ltd. was recently given an award as one of Canada's best managed companies. It's known for building high-voltage electrical systems across North America, and around the world. Its real power, though, lies in the 1,200 employees who work for the company, so keeping them safe on the job is paramount.

"Power line construction can be a high-risk industry," says Craig Hrynchuk, the company's vice president of health, safety and environment. 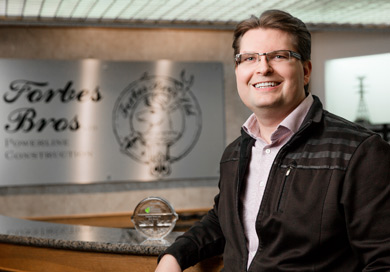 "Some of our busiest times happen in the cold season, when there are environmental restrictions. We have icy frozen ground conditions, and workers climbing from extreme heights in the air in -30 degree weather. You have to have a great deal of respect for all the hazards on the worksite."

Hrynchuk says while the company had a disability management plan in place, it lacked the kind of oversight that kept injured workers connected to work, and helped return them to their jobs safely, and quickly. The result was higher-than-industry injury rates, and rising WCB premiums.

The company wasted no time in reaching out for help and resources. Hrynchuk sat down with WCB account manager Andrea Dodd to make a plan and set goals. Dodd came to the health and safety team's annual planning session to talk to them about return-to-work plans and modified duties. She talked about the free seminars offered through WCB-Alberta and its Millard Health rehabilitation centre. The company started using the Occupational Injury Service (OIS), a program that gives people who are hurt at work fast access to medical services at designated OIS clinics.

"To have 'meaningful' (modified) work is so important. We want them to feel connected, to feel part of the team."

The all-hands-on-deck approach proved to be very effective. Before long, Forbes Bros. found itself receiving the maximum 20 per cent rebate through the Partnerships in Injury Reduction program, a voluntary pricing program that encourages injury prevention, and effective workplace health and safety practices.

Money from one such rebate went toward a comprehensive job demands analysis of all its field positions. Using ergonomists, kinesiologists and occupational therapists, the company looked for ways to alter, change or modify tools and equipment to make physically-demanding jobs less so. Using results from that assessment, it was also able to create a comprehensive and extensive modified duties list for all of its positions to ensure injured workers would be given meaningful work while they recovered.

"To have 'meaningful' work is so important," says Hrynchuk. "If you give an injured worker non-meaningful tasks, they don't feel as though they're contributing, and it pushes them further away from their co-workers. We want them to feel connected, to feel part of the team."