First to the scene

This story deals with sensitive subject matter including self-harm and suicide. Some names and identifying details have been changed to protect the privacy of individuals. 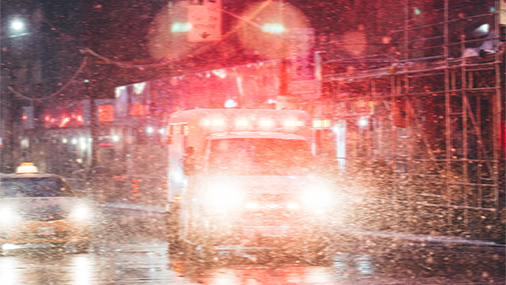 Jacob was an emergency medical technician with Alberta Health Services who suffered silently from post-traumatic stress disorder—or PTSD—for years. Jacob’s psychological injury made living a normal life impossible. As his world became smaller and smaller, Jacob seriously considered suicide until a conversation with the widow of a well-respected colleague encouraged him to file a claim with WCB, get diagnosed and receive help.

PTSD wasn’t something that happened all at once

“It’s not like I had one terrible call and was changed forever,” Jacob explains. “Everything was going fine until 2011 when I had an awful year—pediatric suicides, homicides, multiple situations on the High Level Bridge and home invasions. These are the calls I can’t forget.” For Jacob, it seemed like every second day there was a fatality. “My world became smaller and smaller. I began isolating more and talking to people less. It wasn’t long before I was no longer functional.”

For Jacob, living with PTSD meant involuntarily reliving traumatic experiences over and over. “Something as ordinary as driving over the High Level Bridge would take me back to the scene of a call. I was constantly thinking about these falls. They tormented me to the point where suicide seemed like a viable option.” Hoping to improve his quality of life, Jacob quit his job as a paramedic. “I thought it would all go away if I got out, but I quickly learned that PTSD doesn’t just go away from not dealing with it.”

Overcoming guilt and asking for help

According to Jacob’s case manager Anita Ferguson, “Jacob attempted to work on himself before filing a claim with WCB, but he was significantly impacted by his work as a paramedic.” “When it got bad enough that I decided to reach out to WCB, I felt a tremendous amount of guilt—I felt like I wasn’t strong enough.” Jacob explained.

Jacob met with special care adjudicator Pamelar Lee who quickly recommended he receive a comprehensive psychological assessment to determine the severity of his condition and begin addressing his needs. “There was an enormous wave of validation when WCB accepted my claim,” explains Jacob. “I was relieved I would be receiving help, but I was more relieved that PTSD wasn’t something I could have beat by myself—this wasn’t me crying wolf, I am suffering from something real.”

Jacob was evaluated in Calgary and diagnosed with a traumatic psychology injury (TPI). He started a TPI program where he received weekly individual counselling with a psychologist for trauma processing, exposure therapy with an occupational therapist and a daily exercise program and weekly group sessions—including a first responders support group. Although Jacob made significant progress during his program, it became clear to the treatment provider that he had permanent work restrictions. Jacob needed a new career and WCB was there to support him.

Jacob pursued an academic route and was accepted into the ultrasound technician program at NAIT. “We tried to remove as many barriers as possible to allow Jacob to focus on his classes, such as providing reimbursement for scrubs and providing parking and mileage during his practicum to save time. We also offered him tutoring, but Jacob was determined and tremendously successful on his own,” shares Anita.

Jacob is working as an ultrasound technician with Alberta Health Services and reports that although he still struggles with several things, he’s functional again. “At the end of the day, no amount of therapy will erase those awful, awful things that happened from my memory. No amount of therapy takes away how much those things suck.” When asked to summarize his experience with WCB, Jacob replies that he was given the opportunity to have a life again. “When I went to WCB, I was all-in. I was still experiencing suicidal ideation, and I felt this was my last chance to fix things. Thankfully, the psychologists, physical and occupational therapists, and Millard team were awesome. There’s no way I could have been successful without them.” Jacob also wishes to thank Pamelar and Anita: “At the end of the day, without them, none of this would have happened.”