Crushed by a combine

Justin Lindquist refers to it as his "wreck."

It happened near Blackie during the fall harvest in September, 2009, under one of those endless Alberta blue skies. With his boss operating the combine, Justin had just stepped out onto the platform to get a moisture sample from the sweeping canola field when the machine jerked unexpectedly, knocking him off balance. Falling backwards through the glass door, he landed between the header and the front wheel of the six-tonne machine. 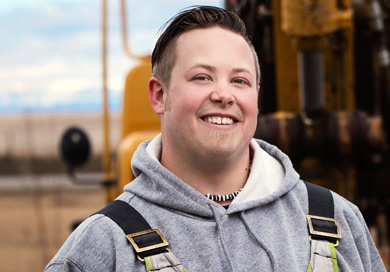 "My boss couldn’t stop fast enough," says Justin, "so the combine basically parked itself on top of me."

His injuries were extensive, and catastrophic.

"Justin had a total of 19 compensable injuries," recalls WCB case manager Rich Spencer. "It was the worst accident I’ve ever seen. When I started going through his file, I started feeling nauseous. I had to put it aside for a while. His injuries were just so bad.

"It was a horrible crush injury. Everything inside him was lacerated."

Justin regained consciousness in the intensive care unit a week later, his broken body a tangle of tubes and wires.

"When I first woke up, it was kind of scary," remembers Justin. "I had breathing tubes and stuff down my throat, so I couldn’t really do anything. I couldn’t even talk."

"I kept things positive, and I never really stopped."

Getting on with life

When he could, though, the then 22-year-old had a lot to say—about getting out of the hospital, and getting on with his life.

“I’m not much for taking the back seat, and having a pity party, or just doing nothing,” says Justin, who’s now 27. “I kept things positive, and I never really stopped. I had a great support system, too.”

Today, he’s the health and safety supervisor at Shawne Excavating and Trucking in High River, where he occasionally gets his hands dirty doubling as a service mechanic.

“I’m a farm kid by nature, so I like being hands-on,” he says. “But it’s good to be involved in preventing the kind of accident that happened to me, from happening to other people. I like the idea of keeping everybody safe.”