Slowed, but not stopped

Kathryn Wilson credits her grandchildren with keeping her sane during her recovery from a workplace injury.

"Sitting still is not my strong suit," says the 63-year-old, laughing. "I like to keep moving. But my grandkids managed to keep me busy, and it was nice to spend that extra time with them." 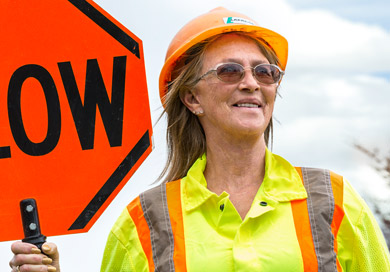 Wilson was knocked down by a tandem truck while she was flagging for Lafarge Canada at a road construction site in Edmonton. She got up right away, insisting she was fine. Ignoring her protests, her boss bundled her into his car and drove her to the hospital. By the time they arrived, she couldn’t raise her arms, and was barely even able to walk.

In the end, she had to undergo two separate shoulder surgeries. The first was to repair the tear in her rotator cuff, the second several months later to reattach a screw that had come away from the bone following the first surgery.

"It’s not something that happens often," says Wilson. "But I knew there was something wrong. I could hear the grinding noise (in my shoulder). I could feel it."

Through it all, she says, her focus never wavered. She was determined to return to work.

"I love my job, and the people I work with," says Wilson, who’s been with Lafarge for eight years. "I didn’t want to be off work—and I work long, long hours. I come home late every night and get up at four every morning. And I just love it."

"I have to deal with all kinds of situations. If you let things slide then somebody's going to get hurt - I know what that's like and I don't want it to happen to anyone else."

Eager to get back to work

"I was champing at the bit to get back."

Lafarge was just as eager to have her return.

"Kathryn has always been a positive, team-oriented employee," says health and safety manager Juanita Dockrill. "And that was true even when she was injured.

"She’s a very conscientious employee, and does everything she can to make sure she and her co-workers go home safely each day."

As soon as she was able, Wilson started performing light duties at the company’s pipe yard, answering phones and maintaining the office. Dockrill says modifying or altering an injured employee’s workload until they’re able to resume their normal job duties is extremely important because it keeps them connected to the workplace.

"Our experience has always been that by keeping employees busy doing valuable company work as they recuperate is a win-win situation."

Wilson has recovered and is back on the job, doing the job she loves. She’s happy to be keeping full-time hours again, even if they are long. She takes her job very seriously, safety even more so.

"The flag person is one of the most important people on a job site," she says. "I’m responsible for my safety, my co-workers’ safety, the public’s safety. I know what it's like to get hurt at work, and I don't want it to happen to anyone else."