Back in the saddle again

Lonny Maas is back doing the job he loves—tending to cattle as they graze on verdant pastures under Alberta’s endless blue sky.

Lonny’s WCB case manager Gillian Farrell says the fact that he is back in the saddle again is nothing short of amazing, and a testament to his positive attitude and determination. 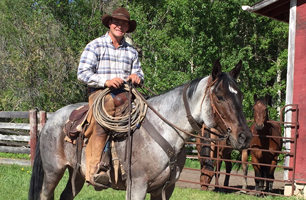 "I don’t think I’ve assisted a more positive, inspiring soul than Lonny," says Gillian. "He progressed at such a phenomenal rate after the accident; he blew everyone out of the water."

Trapped under a tremendous weight

The 25-year-old was working on a cattle ranch near Valleyview one summer as a ranch hand when the accident happened. While roping yearlings, the horse he was on stumbled and flipped over, pinning him under its thousand-pound girth.

"It was a horrible injury"

"It was a horrible injury," says Gillian. "And he was so young. It was hard to imagine him ever being able to comfortably sit on a horse again. He was a seasonal worker, and there were limited options for modified work options available because of the severity of his injuries. We were prepared to pursue vocational rehabilitation for him to explore other employment options."

Lonny had other ideas.

A month after the accident, he left the hospital in a wheelchair. Three months later, he swapped out the wheelchair for crutches. And three weeks later, he threw those away and started walking again. He was actively attending physiotherapy, and then started adding daily trips to the gym.

"I knew I was going to go back to chasing cattle."

Determined to get back on a horse

Less than six months following the accident, while at a friend’s, he got back on a horse.

"The horse was really gentle, but I was still feeling pretty broken at the time," he admits. "I rode in a circle and then got off."

Still, it was a start.

"I knew I was going to go back to chasing cattle," he says.

Gillian says Lonny’s employer was in his corner all the way.

"During Lonny’s recovery, his employer was very supportive," she says. "He would visit with him, check in on him; it was obvious there was a very good relationship there."

Almost nine months to the day he got hurt, Lonny was back with his date-of-accident employer, and he hasn’t looked back. He’s grateful for all the support he’s received, from his employer, from family and friends—and from WCB.

"I had a really good experience (with WCB)," he says. "Gillian covered everything—my wage, medication, travel back and forth to physio—so I could focus on getting better."