The strength of a mother's love

Marina Cartier wanted to know one thing: Would she be able to dance again?

"That’s the first question I asked my surgeon, even before I was wheeled into the operating room," recalls Marina. "My son Bill was getting married, and I wanted to be able to dance with him at his wedding." 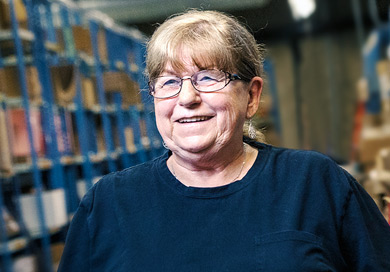 An assistant lead hand for a local wholesaler, the 63-year-old suffered a major crush injury to her legs when the power jack she was operating at the company warehouse wound up on top of her.

"I was going down the aisle to drop off a skid of product," explains Marina. "The power jack was fairly new. It was big, and fast. I bounced off the machine, but I still had my hand on part of it, and I wound up hitting the throttle with my thumb. The machine and I went straight back, into the conveyor belt."

Her left leg was broken, but the right one was even more severely damaged, with bone protruding from the lower part of her leg. When WCB case manager Amanda Prosser received Marina’s claim, she made the decision to visit her in the hospital.

"I wanted to put a face to the name," says Amanda, "and let her know someone had her back."

When Marina told Amanda about her son, and that she had every intention of dancing at his wedding, the two formed an instant bond. “That gave us a shared goal to work towards," says Amanda.

“I told everyone right from the get-go that I was going to back to the job I left.”

Determined to return to work

Doctors had to use a lot of hardware to repair the damage to Marina’s legs, but it barely slowed her down. She never missed a physiotherapy appointment, and in fact often arrived early. She was determined to return to work, and to the same job.

"I’ve worked full-time since I was 16 years old," she says. "And I told everyone right from the get-go that I was going to go back to the job I left. I don’t think anyone believed me—but I knew."

Attitude the key to recovery

Within eight months, she was back doing full-time modified duties at the warehouse as part of a gradual return to work, and six months after that she was back to her regular full-time duties.

"I think one of the biggest things is your attitude—I laughed all the time."

Weeks after she resumed working full time, Marina flew to Mexico and watched Bill get married in an emotional ceremony. Later, as the sun set and guests toasted the day, mother and son enjoyed a moment together, dancing in celebration.