Donna Wilson clicked on the email attachment and there it was: A photograph of Mike Barker, his wife Jill and their newborn baby girl Ruby, asleep in her Daddy’s arms.

In that moment, the miracle of life had never seemed more poignant.

The image began to blur, made fuzzy from her tears, as the enormity of what she was looking at began to dawn on her.

“I thought: ‘Oh my goodness, it worked. It worked! And there she is—there’s our WCB baby.” 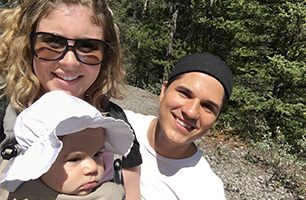 Donna is a case manager with WCB’s special needs team, and deals with claims where people have suffered severe and often catastrophic injuries as a result of burns, amputations, psychological trauma or spinal cord damage. Mike is one of her claimants. When the email arrived, it had been some time she had heard from him, ever since she had authorized a second round of in vitro fertilization for him and his wife, Jill.

"I thought: ‘Oh my goodness, it worked. It worked! And there she is—our WCB baby."

Quadriplegic as a result of an on-the-job motor vehicle accident 10 years before, Mike had nevertheless maintained his positive spirit, determined to move forward and get on with his life. He took a year off university after the accident—he was 19 when it happened—but returned to the U of A to get his bachelor of commerce degree. He met his wife Jill working a summer job in 2009, and married her three years later. Soon after, the couple began talking about having a family, a conversation which soon included WCB.

Life goes on, despite a wheelchair

Donna says she and her colleagues work hard to remove barriers for claimants to better foster independence. When the desire to have children comes up, case managers can discuss if IVF might be medically available to them, and let them know that it’s something that WCB supports.

Needless to say, it can have life-changing results, something to which Mike can attest first-hand. He says that over the years, WCB has helped him with a lot of things—schooling a vehicle, wheelchairs, adaptive equipment—but nothing quite as profound as helping him become a dad.

“I never knew I could love something so much,” says Mike of his daughter. “(Becoming a parent) is one of those things where you can’t imagine the feeling until it happens.

“When she was born, I cried like a little baby.”