Injury closed one door, but opened another

From the moment he was injured on the job, Mohammad Setareh Kokab set his sights on getting back to "real life" in the working world.

The 35-year-old was an offset press operator working in Calgary when he suffered a severe wrist fracture after a fall from a ladder. The injury left him with permanent work restrictions that neither surgery nor physiotherapy could fully resolve. He was going to have to change careers, a prospect he found daunting. 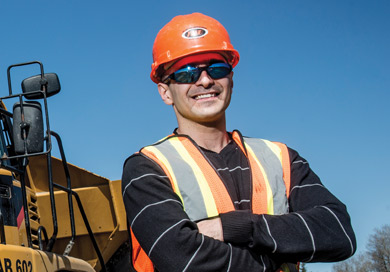 "It was scary for me because I didn’t know where I was going to go, or what I was going to do," says Mohammad. "I thought: ‘How can I get back to real life?"

The answer came to him through a casual conversation he had with another student while he was taking computer courses arranged by his case manager at the Workers’ Compensation Board.

The student, an older gentleman, suggested he might want to consider becoming a heavy equipment operator. Mohammad decided to do some research on his own.

Putting together a proposal

"I found out it was a technical job—like the one I had before—and there were a lot of job opportunities. The money was great, too."

He put together a proposal for his case manager, who readily approved the necessarily training. Today, Mohammad travels between Calgary and Fort McMurray where he operates a heavy hauler in the oil sands—and earns nearly $20,000 more per year than he did in his previous job.

Getting back to real life

He is grateful to be back to real life.

"The accident wasn’t good for me," he says, "but I couldn’t change that. It happened, and it started me on a process where after a while good things started to happen. Now I have a new job, a job that I love. The work environment is good. The people are nice. The money is good. The schedule is good. I’m one hundred per cent happy."